Should You Say Goodbye to Inactive Subscribers? In an ideal world, every contact on a company’s email list would be active, engaged, and a frequent buyer. Unfortunately, that’s not how it always works. Subscribers grow and evolve, and some become inactive over time.

So what do you do with inactive subscribers? It’s actually a hot topic right now, with two schools of thought.

In the past, the rule of thumb was to “prune” inactive subscribers from your list to avoid problems. What kind of problems? Sending emails to inactive customers could hurt your deliverability. If Google or Yahoo sees that you’re sending email after email to people that aren’t opening them, they could start diverting your emails to the spam folder.

Additionally, some email marketers see inactive subscribers as a waste of time and resources. What’s the point of focusing efforts on a contact that doesn’t seem interested in your company or product anymore?

But there’s another point of view in this debate. An inactive subscriber is better than a non-existent one, right? After all, it costs five times as much to acquire a new customer than it does to keep an existing one.

At some point, an inactive subscriber was interested in your company or product, so it stands to reason that you could encourage him or her to rejoin your active customers before you remove them from your list.

A business that has good opt-in practices, organically grows its list and regularly monitors their campaign results for engagement trends can safely and carefully attempt to convert inactive customers with effective reactivation or re-engagement strategies.

Say goodbye to inactive subscribers or not?

What’s a business to do? Do you say goodbye to inactive subscribers or not? Especially since not all inactive customers are the same.

Definition: the first category of inactive subscribers is “sleepy.” They were active and engaged subscribers, but just entered a cool-down period that has you wondering if they’re going to come back or not.

These inactive subscribers have the most potential. They’re on the brink and, with the right email marketing, you can swing their buying potential your way once again.

You don’t want to say goodbye to these subscribers; try to re-engage them. Create a re-engagement campaign, which, as the name implies, is a series of emails that are designed to get subscribers interested in your email marketing and business once again. You can use automation to trigger these emails at the exact time when each subscriber is dropping off in activity.

Time is of the essence here. Get a campaign created and sent before these sleepy customers become 100 percent comatose.

Your email messaging might say something like, “We haven’t seen you lately,” and offer a discount to entice a purchase or just provide a link that gets subscribers back to your site.

Examples of emails to send

Here’s an example of a re-engagement email from Grammarly. Notice that it references this subscriber’s week-long absence and provides a link back to the company’s website. Here’s another example from Teespring that offers a more personalized touch. It has information that’s specific to this subscriber and encourages him or her to come back. You’ll want to send several emails like this. A re-engagement campaign isn’t a one-and-done effort, so plan to send a couple of emails to wake these inactive subscribers, and make sure you wait at least 48 hours before sending another email to the people who didn’t open the first email.

Definition: the second category of inactive subscribers are those that were once active, engaged customers, but are now comatose. These subscribers haven’t opened, clicked, or converted in a long time. This group has very little likelihood of engaging with your emails again.

If these subscribers have gone a serious length of time without engaging with your emails (say 6-12 months), they’re not magically going to hop on board by sending a coupon code their way. But that also doesn’t mean you should just wave goodbye and call it a day.

Sri Somanchi from Gmail recommends a ramp-down approach. Just like when you start your email program, you need to ramp up (or switch to a new ESP) gradually; you need to amp down inactive recipients over time.

Send these subscribers an email that asks if they’re still interested in being part of your list.

This “recommitment email” should send the subscriber to your preference center, so he or she can decide if they want to stay on your list and, if so, how frequently they want to receive your messages.

This could involve the following:

Definition: a never-active subscriber is one whose only interest in your business was signing up for your email list, possibly for something other than receiving regular emails from you. They joined and then vanished. They have never opened any emails, let alone clicked on any links or made a purchase, so what motivation do you have to keep emailing them?

While this may seem a hard step to take, a key point to keep in mind is that you have already tried to re-engage these contacts when they become dormant or unengaged, or when they were in the “zombie” segment. If this person has never shown any interest in your emails and you have tried to re-engage them, it is clear that continuing to send them emails is a fruitless activity.

Continuing to send emails to people who have never ever engaged with your campaigns, open an email or clicked on a link is not only a waste of time and money, it will also result in damaging your sender reputation as the number of “ghost” contacts far outweigh the “active” contacts in your list.

Eventually, inbox providers like Gmail, Yahoo, Hotmail will notice that the majority of your emails go unopened, and they will start to filter more and more emails to the spam folder, or simply block your emails outright!

Before this happens, remove those dead “ghosts” from your list.

Once you’ve taken the time to audit your emailing list and properly identify who your inactive subscribers are, you want to take the necessary time to try and re-engage them before you write them off as gone forever.

It costs five times as much to acquire a new customer than it does to keep and re-engage an existing one. So, before you just say goodbye to anyone who’s been inactive, make sure you’re sending them a re-engagement email. After all, you don’t know why they’ve been inactive. They may have:

No matter what their reason, you shouldn’t just remove them from your mailing list before trying to reach out to them.

One great way to do just that is to send them an email asking them if everything is all right or if they want to continue receiving emails from you. Take this example from Typeform.

Their subject line reads as follows:

Right away, you’re showing your inactive subscriber that you’ve noticed their absence. Also, adding the smiley face tells them you’re sad about their inactivity. Your subscribers who’ve gone inactive but still want to remain on your mailing list will naturally click on this message to see what you have to say.

Once an inactive subscriber opens the message, they’re invited to take a short lesson to help get them back on track. 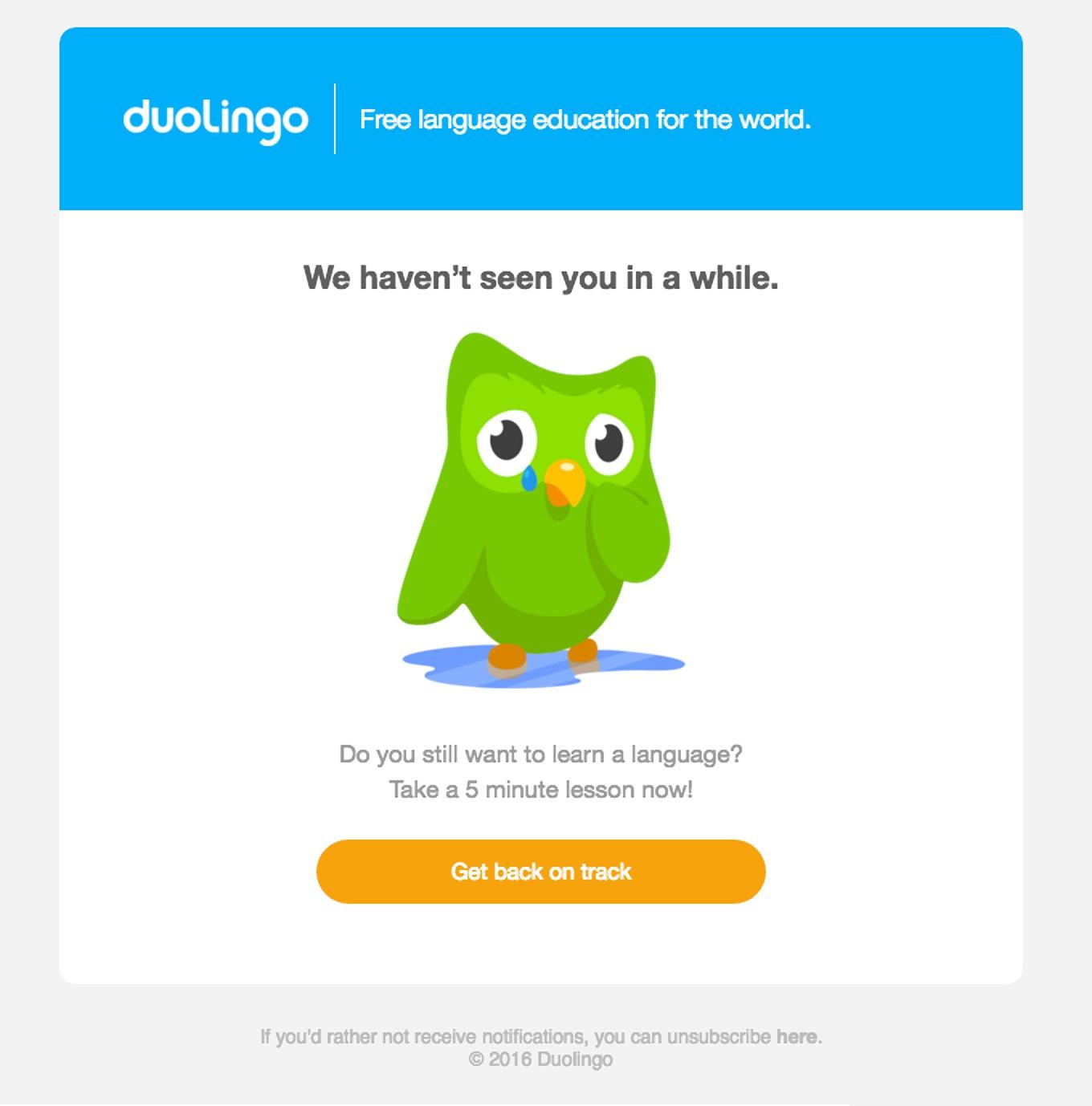 So what happens once you’ve gotten them to open the email? If they’ve gotten that far, chances are they don’t want to leave just yet. So you have to make sure you’ve included a perfectly clickable CTA that’ll entice them to re-engage with your brand. Some of the best ways to re-engage your subscribers are by:

Remember, once you’ve segmented your lists and identified who’s gone inactive, you want to make sure you’re correctly re-engaging them through a re-engagement email campaign. It’s much more cost-effective in the long run to try to win back your subscribers than it is to try and find new ones.

When re-engaging your subscribers, you want to make sure that:

Ready to start designing stunning re-engagement email campaigns to win back your inactive subscribers? Then request your live demo with Campaign Monitor today!

Get your deliverability on track.