Ask any marketer what they measure their email marketing results by, and without fail, one of the first statistics they’ll mention is open rate.

It makes perfect sense that this would be one of the first metrics named, as it’s often the top line on anyone’s email marketing analytics dashboard. As long as marketers have been sending emails to customers and prospects, they’ve been looking at open rates to give an indicator of success.

But with the release of Apple’s Mail Privacy Protection feature, all of that is about to change. For a very in-depth look at MPP and how it works, you’ll want to consult our guide on the topic. But for the sake of this article, you only need to know this key effect:

MPP takes away marketers’ ability to track open rates, meaning the future of open rates, and how we measure success in email, is changing in real-time.

But does this mean that the open rate as a meaningful metric is really dead? Let’s take a look at the future of open rates, and how we can start thinking beyond them from this point forward.

So, are open rates really dead?

Listen, the is ____ dead?! conversation is usually an overblown, knee-jerk reaction to something. People have been trying to say this about email for years. But this time, it’s very true. Email open rates as we know them are a thing of the past.

When a user opts-in to Mail Privacy Protection, they’re allowing Apple to pre-fetch (or download), emails and email images to their device. This takes place with or without the user deciding to open and read the email message. Email image pixels, which indicate opens and open rates, are included in this pre-loading. This means an email may be marked as open even though the user did not open or read it.

Anyone using the native Apple Mail application to read their email, be it on an iPhone, an iPad, or a Mac, is able to turn these features on. And while we don’t know what the final adoption rate will be, we saw a clear and steady increase in open rates in our 2022 Email Marketing Benchmarks Report after MPP was released. Looking at this data, we think it’s safe to say that, as MPP is adopted by more users, open rate will become an increasingly unreliable and unimportant metric.

Why you don’t need open rates to be successful

While this may seem sudden and drastic, the truth is, open rates have never been as reliable as you might think. While open rate was designed to reflect human interaction with an email, those numbers have already been skewed in the past by anti-spam filters, autoresponders, and an increasing number of mailbox providers who had already disabled open tracking.

So, though this is the biggest and likely final nail in the coffin, the open rate was never the solid, reliable metric that you might have thought.

Even at its best, open rate as a metric was not a key indicator of success — it was merely a proxy we used along the way. Website visits, purchases, revenue generated; those are the sorts of goals we’re after when crafting an email campaign. And in a post-MPP world, it’s more important than ever to keep their entire customer experience in mind, not just open rates.

Yes, open rates offered insight into how engaged your subscribers were, and you might be worried about how to track reader engagement moving forward. Don’t fret, there are plenty of other, more important metrics to track that will give you a better understanding of how and how frequently subscribers are interacting with your emails.

Here are some ideas we have on optimizing your emails for engagement, beyond opens:

Use surveys to get a pulse on your subscribers

Including surveys in your emails moving forward is going to be clever for a couple of reasons. First, surveys are a great way to invite clicks in an email that might not garner many otherwise. Giving readers different ways to click on your emails will help you get a good idea of who’s engaged and who isn’t.

Second, surveys can be a great way to gather first-party data. You can ask your subscribers for their content preferences, or even gather information. Asking for data like their location or what industry they work in with help you segment your audience further, and deliver a more personalized email experience. 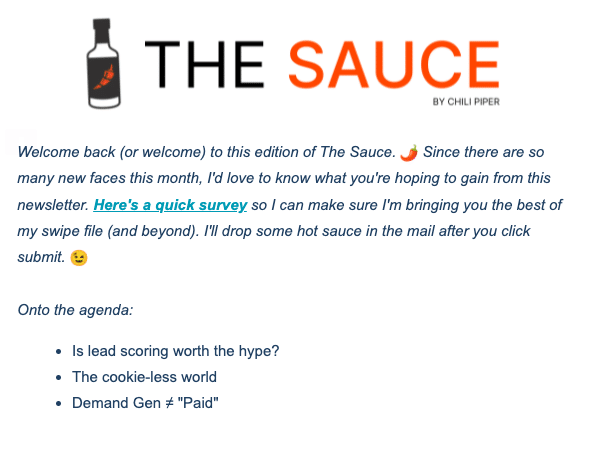 Chili Piper executes the survey idea well in a recent newsletter. There’s more content underneath, but leading with a survey in the intro gives readers a clickable element up top. It also gives Chili Piper the chance to learn more about their subscribers in a friendly, voluntary way.

Replies are also a trackable metric that you can use to monitor email engagement. And what’s cool about this one is that inviting replies is much more personal. It shows that there’s a person behind the creation of that email, not just a company.

With this in mind, you’ll want to make sure you have a system in place for handling replies. Asking for replies in an email going to a huge list all at once could overwhelm whoever is replying to them on your team. But asking for a reply to a welcome email, for example, which goes out automatically at different times, is unlikely to overwhelm your inbox too much.

As we mentioned earlier, the goal of an email campaign is rarely just to get opens or clicks. Mor often than not, it’s what a user does after clicking through your email that’s important.

If you have access to Google Analytics or other tools on your website, use it to see what activity users ate taking after clicking your email. How many are purchasing a product? How many are scheduling a demo? It’s often the activity after they click an email that matters, and those are the high-value insights you need to include in your reporting.

How we’re adjusting in Campaign Monitor

Since Apple announced Mail Privacy Protection, our product team has been adjusting our analytics dashboard to show you meaningful, accurate metrics moving forward.

To give you the most reliable measure of email engagement, we replaced CTOR with click rate on the Campaign and Overview pages. You can still access CTOR from the Clicked column — check out the example below.

We have added handy reminders about these email metrics that you can refer to. Click Learn more to access relevant resources on our Help Center. And remember, we’re in the early days of this, and we’re still testing and studying the impacts. We will have further updates for you once we have more information.

Yes, it looks like this is the end of open rate as a reliable email marketing metric. In the short term, we’ll need to rethink some of the ways we report success for email campaigns. But this also gives us a chance to reflect on what metrics really matter to our campaigns, and start optimizing for and reporting on those things.

The open rate is dead, but email is anything but.

Everything you need to know about Apple's Mail Privacy Protection feature.

When it comes to email marketing, all the information you can get is helpful. Here…

We dig into how to balance list growth with engagement and why you should.